Everyone knows that technology startup ecosystem in the private market is growing and is increasingly becoming more important in South East Asia. To really understand the context, I did a deep dive into the ecosystem to understand the role of private tech startups in the market, backed by facts and numbers.

As you can see in the presentation embedded above, the State of South East Asia Technology Startup Ecosystem that we published outlines the key insights of SEA Tech Ecosystem from the Capital Flows in Private and Public Market to Exit Landscapes and Sectors to Watch. You will also find a list of 110 active private tech investors in SEA. (Click here for a larger format on SlideShare)

All the charts below are fresh and juicy, please feel free to download these images and use them wherever you choose. (Just a quick shoutout to @rictan0 on Twitter will be very much appreciated)

To founders/investors/regulators in South East Asia, here are a few reasons why we should take tech market more seriously.

Since 2013, out of six countries (Singapore, Malaysia, Thailand, Indonesia, Philippines and Vietnam) in SEA examined, we observe 5 public markets fell short of the 10% Compound Annual Growth Rate (CAGR) – only Vietnam’s VN Index achieve more than 10% CAGR. However, it’s worth noting that Vietnam’s growth is mainly driven by increasing privatization effort led by the government as outlined by Deloitte in their latest SEA IPO Market Report 2016. This is in contrast to CAGR of 58% in private funding for SEA Tech Startups, showing a strong growth. We also went from having 1 unicorn before 2013 to 7 unicorns now in the span of 4 years. This signifies an increasingly grown-up class of SEA private technology companies that have been fueling economic growth in an unprecedented way. As these companies come of age, we can expect them to play a pivotal role in the regional economy. 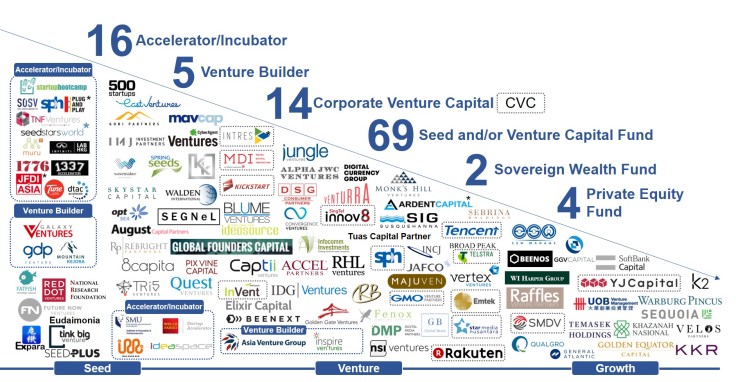 Approaching end of 2016, we saw a slowdown of venture builders and the rise of accelerators/incubators (both local/foreign). There is a rise of corporate venture capital (CVC) in the region which is worth noting, from virtually non-existent to 14 of them in 2016. Foreign CVCs are coming into SEA to look for strategic investments and potential business expansion, while local conglomerates and large cap companies are increasingly aware of the disruption of tech startups to their traditional business.

Huge opportunities are available for Series B round onwards to help startup scale past Series A. VCs with scaling experience/network will have an upper hand in accessing to the best deal. However, for SEA-based VCs, it will be challenging to raise a large enough fund (>$150m) from SEA-based Limited Partners (LPs) due to lower risk appetite. Majority of the fund will likely need to come from foreign LPs. Taking hints from EU and USA, larger funding round at later stage VC round is essential for a startup ecosystem to provide financial capability and liquidity for companies to grow into unicorns. (Chart from RHS is recreated from GP Bullhound Unicorn 2016 report)

Bursa Malaysia (MYX) and Philippine Stock Exchange (PSE) hasn’t been seen any major announcement related to tech startups IPO. However, ACE Market of Bursa Malaysia, the alternative to the Main market, requires less stringent listing requirement, has got a number of non-Web 2.0 tech companies listed on it. Catalist, the equivalent of ACE in Singapore aims to create a similar environment, in which its success remains unknown [Source]. Indonesia Stock Exchange (IDX) recently launched their in-house startup incubation program [Source], but this is hardly a sign of readiness for huge IPO. Perhaps a Garena $1b IPO in the US will anchor the investors’ confidence in SEA to consider more tech IPO in SEA.

Okay, this last point is purely an opinion. Let me know what you think!

This post is also featured in TechInAsia, e27, and VCInsiderNews.

Technology, Entrepreneurship, Venture Capital and everything in between.