I crunched some data from Pitchbook and Crunchbase on the SEA funding. Only startups that have been backed by angels, seed fund, incubators/accelerators and venture capital are included in my analysis. The following are my findings and views on the landscape in 2016: 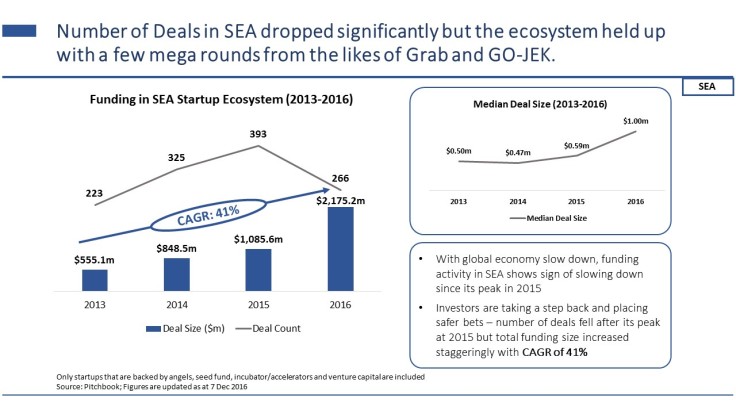 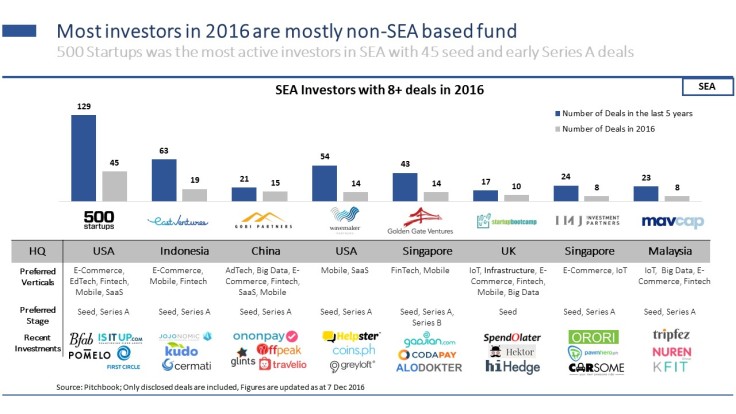 Investors have been very cautious in 2016, mainly adopting the ‘wait-and-see’ approach to investing whilst placing fewer but larger bets on proven business models. It’s been a tough and cold funding winter for most startups looking to raise their venture round (late Seed to Series A/B). However, this year-long funding winter is not unique to only SEA, as outlined by VenturePulse, an analysis jointly published by CBInsights and KPMG. On another note, the increase in median deal size coupled with the fall in number of deals further support the argument that investors are looking at startups with proven business models, a large addressable market, traction and team experience investing at venture round.

Most SEA investors are still foreign funds, with the likes of East Ventures, Gobi Partners and Wavemaker Partners expanding their presence in SEA. This is a very different dynamics from the North America and European landscape, in which most early stage startups are funded by domestic VCs, which is shown by research to be one of the significant factors that determines the success of the startups due to the direct value-add from the domestic VC. Founder and VC alignment is especially important in early stage startups as capital injection from VCs often come with pressure on growth, so founders need to also understand what real value-add the VCs can bring to the table, such as subject matter expertise, market connectivity and scaling experience, other than just strategic advice. Time will tell if these foreign VC investment will realise.

Technology, Entrepreneurship, Venture Capital and everything in between.